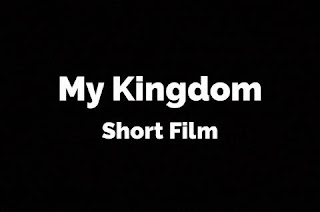 The Story:
The King (Luke Kidd) reprimands his most trusted and loyal Nobleman (Ritchi Edwards) after a near-disastrous event.  Issues of loyalty and trust are brought up between the two, leading to an unspeakable decision.

The Synopsis:
A feature length film has the luxury of telling a fully-flushed story where we get to see a beginning, middle, and end to a tale being told on screen.  That luxury isn't afforded to short films, where a filmmaker has a very limited amount of time to tell a compelling, gripping story.  Yet, that's exactly what Luke Kidd managed to do with his short film "My Kingdom," a tale that, despite lacking a beginning or ending, manages to tell a compelling story nonetheless.  A story that is so perfectly written, performed, and executed, that we as the audience desire to see the events that led up to the confrontation, and the fallout afterward.

Not only did Luke Kidd direct this short film, but he also starred as the King, a noble man who wants to do what is right for his people, something his father seemingly didn't care too much about.  His father appeared to rule with an iron fist, keeping the people in captivity, until this new King set them free.  Sometime after this happened, the kingdom seemed to have been under attack, resulting in the near death of the Queen.  This is the setup for the confrontation between the King and his Nobleman, a man that the King trusted more than anyone.

The Nobleman - brilliantly played by actor Ritchi Edwards - seems to be a man with the same high moral values as his King, but it seems that, in the King's eyes at least, he made a decision that could've resulted in the Queen's death.  The Nobleman shows genuine remorse for his actions, even if he felt that they were done for the good of the King and the people, but what this short film also shows is that with all decisions, there are dire consequences.

We see the pain in the King as he enacts his sentence on his most loyal friend, and the agony that the Nobleman feels for receiving such a harsh sentence.  To this end, they create a continuation that we are dying to see, how this sentence will affect both men going forward, and the repercussions of them.  If this was a short film with lesser actors, we wouldn't care for the plight of these men, but since it was so brilliantly acted, we can't help but wonder what fates will befall them.

Cinematographer Charlie Wharton blends the light and shadow in such a way that it gives off "Game of Thrones" vibes, which helps add to the depth of story being told, and the editing is top notch for such a small endeavor.  The music - supplied by Kyle McCuiston - only increases the tension between the two men.  Finally, the setting - shot at the majestic Hedingham Castle - and costume designs (from Chameleon Costumes) are the icing on the cake for this short film period piece, filled with tension and heightened emotions told through two accomplished actors in a very short period of time.

The Summary:
A short film has to tell a compelling story in a shortened period of time, and Luke Kidd's "My Kingdom" managed to do that in such a way that makes the audience wish to see the previous chapter and what lies ahead for these two men, due to strong performances and a solid script.

Popular posts from this blog

Major Theatrical Releases August 2019
Typically August brings about a slew of subpar films that the production companies want to throw out there before the fall, and this year looks to be no different.  While there's some really good gems in the bunch, it looks like it'll be another subpar month at the theaters.

Here are the major theatrical releases for August 2019...

**THERE WILL BE NO SPOILERS** **DATES ARE SUBJECT TO CHANGE**

Fast & Furious Presents: Hobbs & Shaw August 2 "The Fast and the Furious" franchise has managed to maintain its popularity and provide action-packed films for over a decade, and now they're branching out and presenting a spinoff film.  Dwayne Johnson and Jason Statham return as their "Fast and the Furious" characters Luke Hobbs and Deckard Shaw as the two adversaries must come together to stop a ruthless international terrorist who's become cyber-genetically enhanced.  Idris Elba stars as the villain, and this l…
Read more 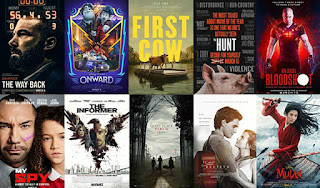 **THERE WILL BE NO SPOILERS** **DATES ARE SUBJECT TO CHANGE**


The Way Back March 6 Looking to see how many classic Oscar-bait tropes they can get into one film, "The Way Back" finds Ben Affleck playing Jack Cunningham, a man haunted by his past (one) who's become an alcoholic (two) and finds his life spiraling out of control (three) until he's chosen to coach his alma mater's basketball team, a team that hasn't won a championship since he played (four) as he attempts to unite the team, make them great, and find redemption for himself (five).  All that said, this still looks like a decent film from the director of Affleck's other stellar work, "The Accountant."

Onward
March 6 Pixar will once again hit gold with their brilliant blend of modern and mythology with "Onward," a story about two elf brothers who go on a quest to bring their father back to life (well, partly, since they managed to get his bott…
Read more

Major Theatrical Releases May 2019
After the hype that is "Avengers: Endgame," May offers a massive collection of differing types of movies, enough to entertain everyone.

Here are the major theatrical releases for May 2019.


**THERE WILL BE NO SPOILERS** **DATES ARE SUBJECT TO CHANGE**

The Intruder May 3 Dennis Quaid goes from starring the family-friendly "A Dog's Journey" to playing a total psycho in "The Intruder."  When a young couple purchases a home from Quaid's character Charlie, they didn't realize it came with an addition - Charlie himself, who can't seem to let his old home go.  I don't expect any twists or turns in this tale, and this looks like a film better fit for Lifetime than the big screen.

Long Shot May 3 Charlize Theron stars as Charlotte Field, the current Secretary of State and who's running for President.  Seth Rogen stars as Fred Flarsky, a nerdy journalist who used to be baby-sat by Charlotte.  Now adults,…
Read more